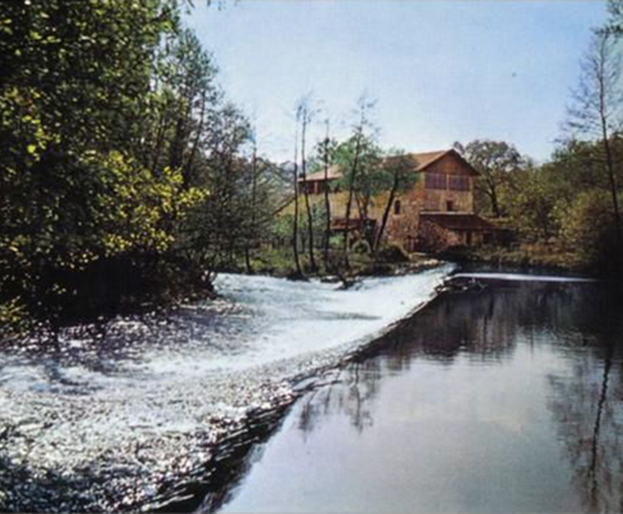 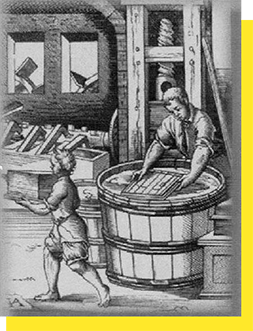 The region's paper past is unveiled by following the flowing current of the Isle river past the successive mills of the Périgord that dot its banks.

The oldest mill of Thiviers is La Brugère originated in the 16th century and its development is closely linked to that of the Papeteries de Guyenne.

It took one thousand years after its discovery by the Chinese in the 8th century before Christ for paper to reach Europe. 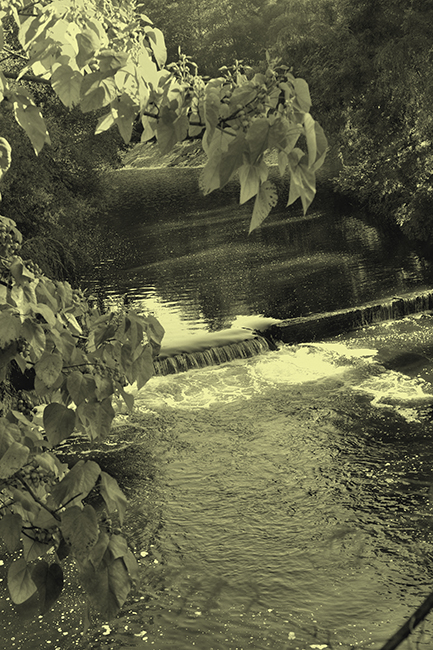 At the beginning of the 19th century, the Gaillard family operated the mill of Les Castilloux (current address of Guyenne Papier), when it was only a mill. The paper factory arrived later when the Gaillard family purchased the old mill of La Brugère, a few meters downstream. The paper factory of la Brugère was then built on the banks of the Isle, a river feeding the Dordogne up to Périgueux. 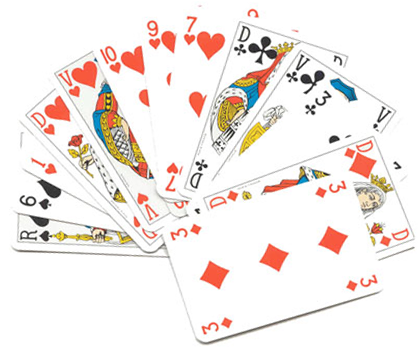 In 1896, the paper factory was leased to the Chartier Marteau Boudin Company, holder of the Grimaud playing card brand. This company had a worldwide reputation to all the casinos of Deauville, Las Vegas and even Shanghai for the supply of playing cards. At the time the Brugère paper factory produced the base sheet (or backing paper) of playing cards and one-side coated paper.

The backing paper is an all-rag paper tinted grey for opacity and elasticity. Today this paper is equivalent to grey cardboard from recycled materials. The backing paper was located between the front of the card (court cards and pips) and the back (design) of the playing card.

This is how playing cards were constituted. Printing was done in Paris where the company owned a plot of more than one hectare at Buttes Chaumont and a workshop near the Place de la République. 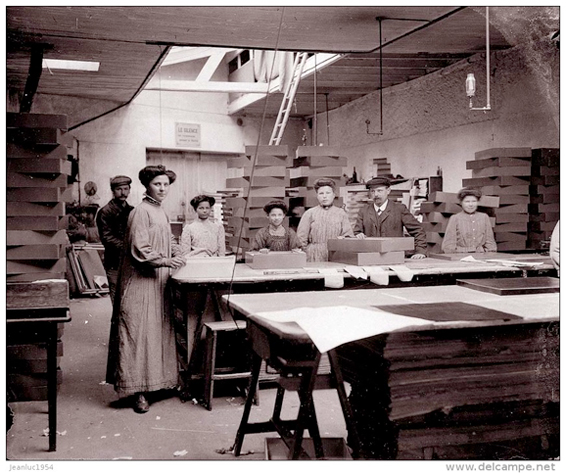 The executives built a new factory at Corgnac sur l'Isle, upstream from the Brugère paper factory, and installed a complete chain: manufacturing of the papers and printing of the playing cards. 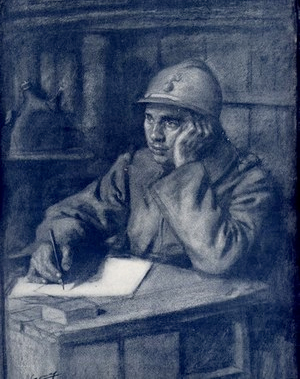 The Company was no longer competitive, Chartier Marteau Boudin was shut down and the Grimaud brand was sold. The descendants of the Gaillard family then took over the Brugère operations to manufacture letterhead and coated paper. 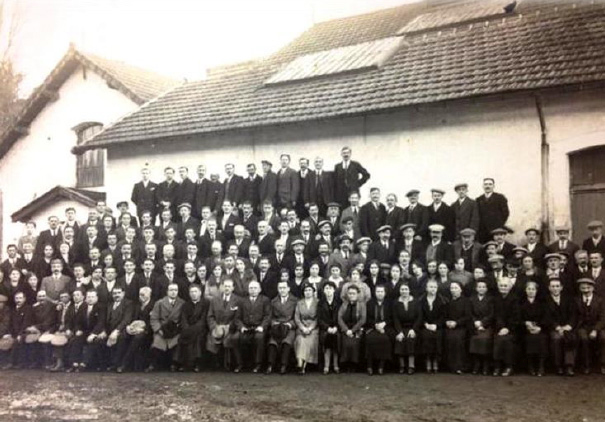 After the death of Emile Gaillard in 1928, Henri de Rocquemaurel, his partner, took over the operation of the mills and of the Corgnac plant where Grimaud had shut down its business. The mill of Les Castilloux then took on its definitive name on March 6, 1943: Papeteries de Guyenne. Antoine de Rocquemaurel, Henri's son, took over in 1947 for forty years. The base paper was made in the factory in Corgnac, the coatings were done at the Guyenne site. First the classic coating until the arrival of cast-coating. The playing cards remained the principal product. 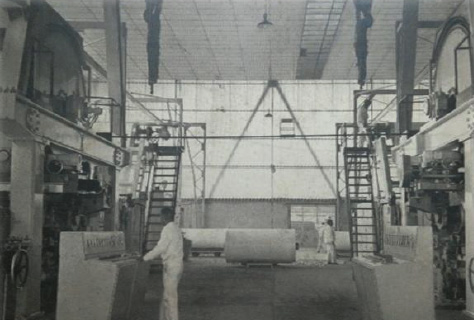 In 1965 Papeteries de Guyenne developed a new salt bath manufacturing process. Cast-coated paper, a coated paper with a very pronounced glossy look is born. New markets open up: the processing of packaging boxes for the luxury industries and wine labels. Guyennes’ machine 6 carried out nearly 20,000 t per year of classic coatings whilst the two other cast coating machines carried out ultra-shiny coatings: cast-coatings. Papeteries de Guyenne become the European leader in this field and work with big perfume manufacturers. The company receives the first prize for the packaging for the box of Vétiver perfume.

The group concentrates its’ activities on two production sites: the site of Corgnac manufactures supports for the classic coatings machine at the Papeteries de Guyenne. The three other cast-coating machines need multi-jets bought in Sweden in Coparforce and Ingesund. The supports for labels are bought at the “Papeteries de Chanteraines” which is part of the Sibille group. Having no successor, the Count de Rocquemaurel signs over the business on the 1st of July 1986 to the Sibille group. The business is already starting to have some difficulties. Christian Sibille, the CEO, falls in love with the site of Castilloux and puts in place some reforms. 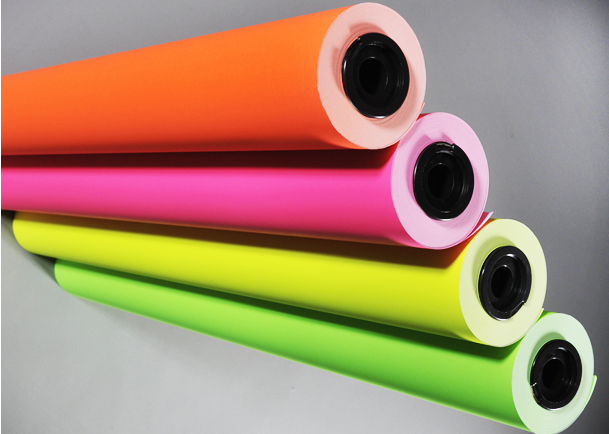 The problems linked to the classical coating machine become an issue. In order to avoid a too drastic restructuring plan, the new products are brought to the factory. The fluorescent coating arrives at Guyenne. 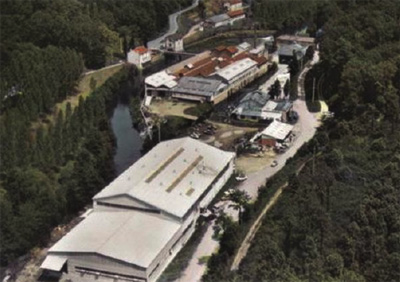 The Sibille group is bought by Ahlstrom which does not wish to take on the Castilloux site as part of the package. Christian Sibille finds another buyer in the form of the group Zuber Rieder. In their factory Boussière (Doux), the group manufactures print media for packaging for luxury industries. The synergy is at first sight obvious between the supports and the cast-coated process but does not come together in the end. The policies are different and the trades are too different. The policy of the group is to attack the competitor Zander on the cast-coating. The aim is ambitious as Zanders is 20 times bigger than Guyenne Papier. For the factory of Boussière Zuber decides to attack Ingesund, 50 times bigger. The reactions of Zanders and Ingesund were immediate. The price of the cast-coating label drops by 30% immediately. This is also true for the Zuber markets. The profitability of the factories disappears which provokes the downfall of the two factories in the group: Guyenne Papiers and Zuber Rieder. Guyenne Papiers declared bankruptcy in March 1995.The liquidation was announced in October 1995. 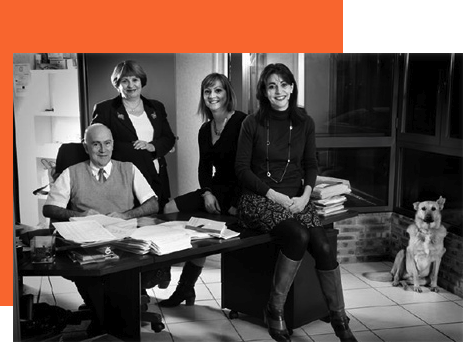 1995 : LAST-MINUTE RESCUE BY THE ALAXA GROUP

The Company almost exclusively manufactured cast-coated paper. However, when the company was faced with aggressive international competition, the paper that was the foundation of its reputation began to hinder its success. New techniques enabled foreign competitors, namely Asia, to produce this type of product more efficiently.

Close to liquidation, Frederic Procop decided to take over Guyenne Papiers and included it in the Alaxa group, an independent paper distributor since 1945. After a difficult but strategic choice, he abandoned the production of cast-coated paper in 2003 in favor of safer, more competitive niche products. He was joined the same year by his daughter, Céline Procop, who was also involved in this change. The decision was received positively and the company became profitable in 2005, later becoming self-financing. 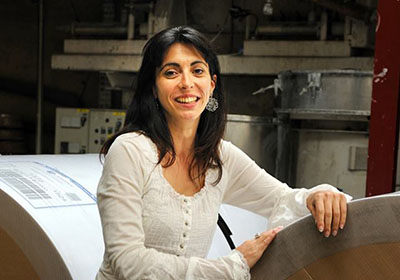 SINCE 2009 : THE ENTREPRENEURIAL COMMITMENT

Céline Procop gradually took over sales operations (2005) followed by the general management (2009) of Guyenne. In 2012, while aware of the company’s strengths and weaknesses, but above all of its great potential, she bought the company from her father and became its major shareholder on 5 July of the same year. Guyenne Papier experienced rapid growth in sales and overcame the difficult transition to the international market. The company became better structured and opened a Research and Development department, renovated the premises, and continues to promote product quality. Since 2009, it has been re-investing the equivalent (sometimes more) of its net turnover in new investments and building for the future.