UNUSUAL HR MANAGEMENT: GUYENNE PAPIER GETS ITS OWN PLAY PUT ON STAGE! 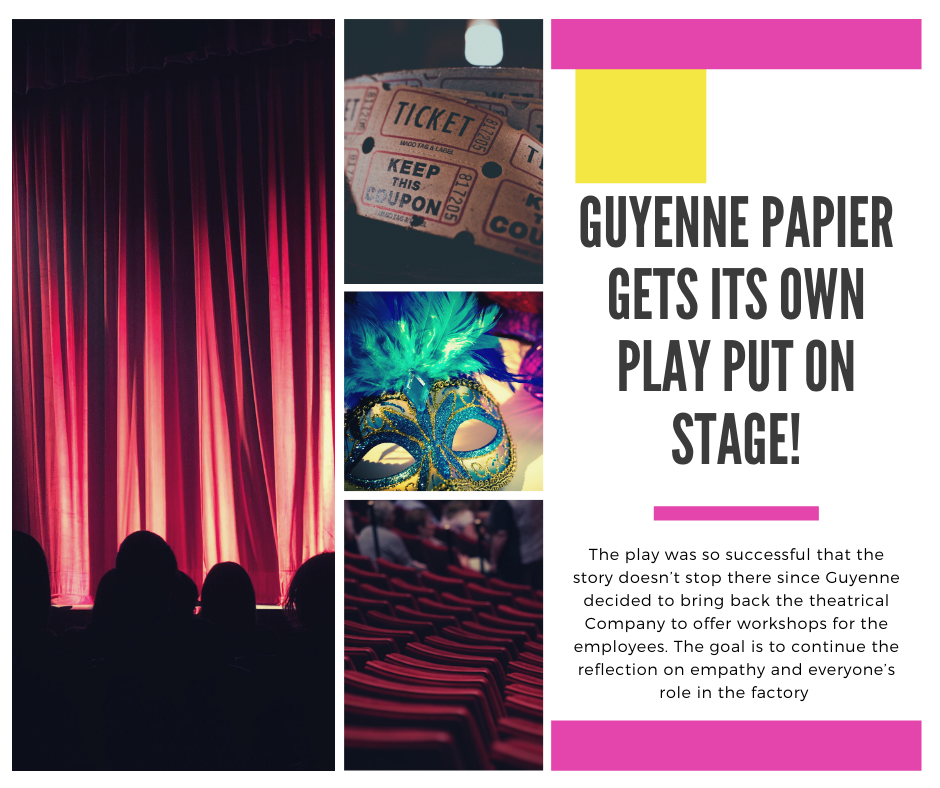 It's completely unprecedented and a little crazy, but Guyenne Papier has actually got a play created which is inspired by the company and its employees!

Created by a professional theatre company and directly inspired by the daily life of Guyenne Papier's employees, the show offers an interesting reflection on team management since it makes it possible to approach intra-company relations differently and to put these more easily into perspective.

Where did Guyenne Papier get the idea from?

Behind this unusual initiative, Céline Procop, the company’s CEO, really wanted to develop empathy between her employees, their ability to put themselves into others’ shoes and consider everyone else’s responsibility. The aim of all this was to reflect on the consequences of one’s own actions and the image that everyone can send to their own colleagues. With kindness certainly but also with truth, frankness and sincerity. Values which aren’t necessarily self-evident in business relationships.

Why choose the theatre to do this?

Theatre, like the cinema, allows you to get some perspective on a situation that sometimes happens before our eyes.

Céline Procop explains: “At work, we all have our noses to the grindstone, the theatre offers us the opportunity to be a spectator of our own lives, of our everyday life. It can be funny or difficult but it is always warm.”

In this respect, the theatre is interesting because it allows us to discuss in another way the issues which are specific to the world of business.

Guyenne Papier’s goal is to “leave the infernal saviour/victim/executioner triangle”. In fact, one thing needed to be said: the 20th century put us in the position of a victim and rather disempowered us. In the 21st century, we now value entrepreneurship and taking individual responsibility. Through this humorous show, Guyenne Papier wants to show the aberration of relationships and roles in which we sometimes entrap ourselves. Now and at all levels of hierarchy, everyone can make a difference and act for themselves, for their colleagues – in short, for their environment.

Céline Procop wants individual responsibility to be tackled through this solidarity project and shared by the employees.

It took no less than a year and a half for Guyenne Papier’s CEO to find a company that accepted to take up this unprecedented challenge. After being rejected by many theatres, she eventually found a member of the company La Femme Bilboquet who agreed to take on the challenge.

“ “Bring the theatre into the factory and introduce the factory culture into our theatre: this was the request from the company Guyenne Papier,” explains Florence, a member of the Theatre Company.

The theatrical troop then remained 3 weeks in complete immersion in the company to share the daily life of the people who work there and to capture the atmosphere of the factory, to understand the heart of Guyenne Papier's profession and discern everybody’s character traits to be able to write the play. It should also be noted that the Guyenne Papier management was never consulted during the design of the play. It did not want to see, nor even intervene in any way whatsoever in the writing of this original work, so as to give carte blanche to the theatrical company La Femme Bilboquet.

The play was so successful that the story doesn’t stop there. Given the positive reactions to this representation, the paper mill specialising in paper coating decided to bring back the Company to offer ninety-minute workshops every month for the employees. The goal is to continue the reflection on empathy and everyone’s role in the factory and even do role plays, played this time directly by the employees.

So watch this space, the theatre could well become a place of choice at Guyenne Papier!

Guyenne Papier accompanies you everywhere in the world!